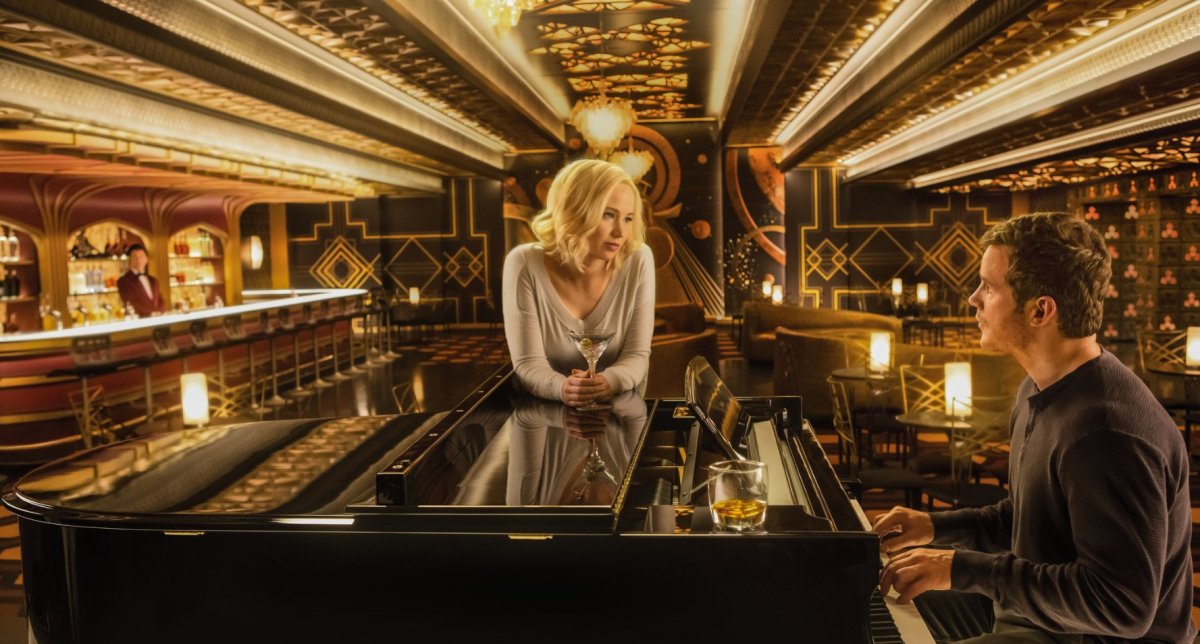 At one time or another, we’ve all asked our self what we’d do if we were alone, stranded on a desert island. In essence, that’s what ‘Passengers’ is all about. Granted, on a desert island you wouldn’t have the luxuries of a multi billion pound spaceship at your fingertips. However, the point is still valid.

It stars Chris Pratt and Jennifer Lawrence as two people who have given up their life on Earth, to travel 120 years into space. Their destination? Homestead II, a brand new planet and the chance of a fresh start for the 5,000 people on board. All passengers travel in hibernation pods, only waking up when the ship is just four months away from arrival.

However, when the ship is struck by an enormous meteor, something goes horribly wrong. One of the hibernation pods wakes up its inhabitant too soon. 90 years too soon. The unlucky soul is Jim Preston (Chris Pratt), an engineer. As anyone would, he spends the next few days in a state of extreme panic, destined to die alone. Or as Jennifer Lawrence puts it: “stranded on a sinking ship”.

He does at least have one person to talk to. Perhaps person isn’t the right word. Arthur, played exquisitely by Michael Sheen, is an android barman who spends his days refilling Jim’s glass of whiskey. He was such a superb character, probably my favourite aspect of the film. Brilliantly written and acted so, so well by Sheen. Without a doubt his best performance since ‘The Damned United’.

The film then confronts you with a tough, moral decision. As Jim wanders the ship, slowly progressing further into a state of depression/delirium, his eyes are drawn to a sleeping passenger. The name on the pod reads Aurora Lane (Jennifer Lawrence). Jim is instantly taken away by her natural beauty and becomes fascinated, obsessed even, by her. He does a background check on her and discovers she is a writer from New York City. Then a thought crosses his mind, what if he wakes her up? Deep down he knows it’s wrong. He is effectively taking away her life, but he’s been alone for just over a year now and he yearns for company.

He discusses it with Arthur, and he keeps reminding himself that it is morally wrong. But the urge is too great, and so he wakes her up. Once she’s gone through the same panic period as Jim, the two quickly bond and have a wonderful time together. Francine Maisler who did the casting for this film did a truly fantastic job because the two actors display very strong chemistry and their relationship is simply a joy to watch. I can’t fault either for their acting as I thought they were both extremely convincing and played the emotional side of their roles very well indeed. It’s impossible not to be invested in this couple.

A point which I can’t stress highly enough, is that the look and design of this film is absolutely incredible. I was genuinely blown away by it all. The spaceship itself looked immense and everything inside it was just breathtaking. The level of detail that has gone into it is something else, and it deserves a massive amount of credit for that in an age when Hollywood’s special effects can often be embarrassing and vomit-inducing (Independence Day: Resurgence anyone?).

Everything the characters interacted with and all of the technology onboard was magnificent. Kudos to Guy Hendrix Dyas (production design) and Rodrigo Prieto (cinematography). Honestly, even if the storyline was terrible and the acting was awful I would still recommend seeing this film purely for the design of the whole thing.

I won’t go into the plot any further as I don’t want to spoil anything. However, I will say that as it neared its climax there were a few things that didn’t sit well with me and couple of things that downright infuriated me. One scene is literally lifted from ‘Gravity’ and shoved in, and that’s made even worse by the fact that I hated it when I originally saw it in that film. Yes, there are some major conveniences and things that simply don’t make any sense whatsoever and although I’m not looking past them, the quality of the film doesn’t drop a whole lot due to them.

I also want to quickly mention the music by Thomas Newman (Spectre, Saving Mr. Banks), I found it to be excellent and a brilliant companion to a lot of the scenes. It really elevated the film to another level.

I love it when a film surprises me when it’s far better than I’d predicted and this is undoubtedly one of them. I really wasn’t expecting much going in, but I left with a smile on my face and I would recommend it to anyone. Interesting storyline, brilliant acting and mouth-watering design.